〜Postwar Reconstruction Story Behind The Delicious Taste of Sendai Gyu-tan〜 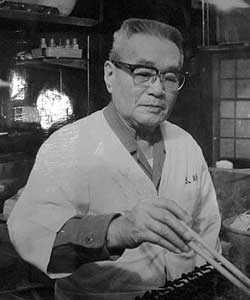 ▲ The Progenitor of Gyutan Mr.Keisiro Sano

The original creator of Sendai Gyu-tan is Tasuke Restaurant's Chef Sano Keishiro. He used one of material from western food which is the beef tongue. After the numerous trials, He finally created the delicious grilled beef tongue which later named as “Yaki Gyu-tan” (Grilled Beef Tongue). After that, The “Yaki Gyu-tan” become one of menu item in that restaurant.
That was the beginning of Sendai Gyu-tan.

Yaki Gyu-tan” which later often called Gyu-tan is Sendai’s famous
food. Almost all people in Japan, when they are being asked about Sendai, The first thing they remember or say about Sendai is Sendai Gyu-tan. This time, [Sendai-Gyu-Town], explain all the true information about the history Sendai Gyu-tan from the original creator and people which are strongly related to it at the time it
was created.

Invite all the friends, family and also colleague to try Sendai Gyu-tan. And also introduce Sendai Gyu-tan to all of them, so Sendai Gyu-tan could be well-known widely. They surely will become fan of Gyu-tan because it’s delicious taste.

（Photo has received a offer to photographer Mr. Chuuichi Nakajima. he have a number of award-winning, such as streets photograph of Sendai.） 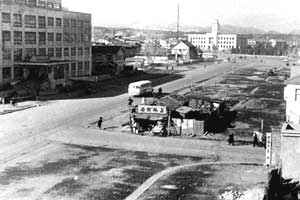 Yaki Gyu-tan” was born around end 1940’s. At that time,
the condition of Japan generally and Sendai specifically, was still in reconstructing situation and still in chaos condition
because of World War II. Many Unemployed person, The lack of food, high criminal record, and many disaster such as building in fire etc. That was very troubled situation. Many wives from war victim opened restaurant in order to earn money. 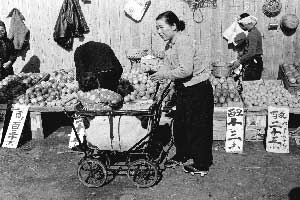 ▲The fruit shop of the street in Sendai Station at 1956

Thing Which unable to imitate

Because the lack of food at that time. Even it was said grilled chicken, in fact it was not only made from chicken. Other various ingredients such as pork, and beef also being mixed together and grilled.

A Japanese Chef Keshiro was thinking about something
which can’t be imitate by another restaurant.

Something which is unique to himself

That feeling grew stronger inside his heart and become his motivation to create something special that only
he can make it. 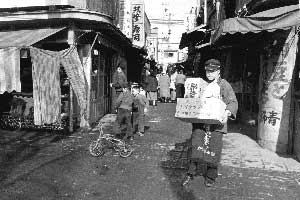 ▲Alley around Sendai Station at 1956

Keshiro was thinking hard at that time, and then he tried to discuss it with his best friend Ono, who had western restaurant.
Several days later, he was proposed by his friend Ono,
whether He want to give it a try providing beef tongue menu at his restaurant. In Japanese food, beef tongue was unusual ingredient. So he was very curious how to make it become delicious in Japanese food. At that time, His friend Ono Suggested him to try the western style beef tongue
food (tanshichuu) at a western restaurant.

After eating that food, he was really surprised at the taste. It was very good. He was very interested in beef tongue ingredient. But at time, there was another problem. tanshichuu is a kind of food which needs a long
time preparation. It takes 3-4 days to prepare it. For grilled food specialized restaurant, this kind of food is not suitable. At that time, He started doing some research how to make grilled beef tongue. 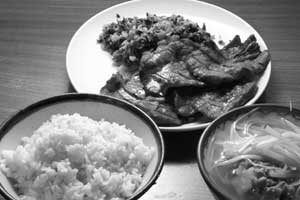 When research started, there was a problem. Beef tongue was a very difficult ingredient. In Sendai, there weren’t any store which sells beef tongue. So He requested to some
slaughter house around tohoku region such as miyagi
prefecture and yamagata prefecture. After he can ensure
the stock of beef tongue, He continued doing his research.

At first, He didn’t know how to peel the beef tongue skin. After several days work, He came up with an idea which become the current method. The method is lying in beef tongue in salt and then grills it. He did some
research about how thick the beef tongue should, slicing way, time to cook, amount of salt, the way to salt it, how to cook it, the fire, and all things after it finish, and all aspect about how to make it become delicious. He did these things alone.

And after all of those had works, Sendai Gyu-tan was created for the first time. 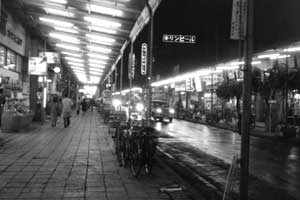 The Beef condition at that time

The shop was closed on first Sunday, third Sunday and fifth Sunday. On weekdays, It collected all the beef tongue from several farms around miyagi prefecture and yamagata prefecture. Starting from early autumn in
1966 until august 1978, in one year, I can only take vacation on August 16th (Obon Holiday) and New year.

So, It is not true that Sendai Gyu-tan originally was made from U.S. army leftovers beef tongue. It is just a false theory which came around as consequence of Sendai Gyu-tan became famous.

Because of that interesting history, We expect when customers eat Sendai Gyu-tan, they can remember some historical events that makes the Gyu-tan's taste become more delicious.