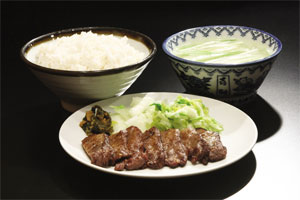 The market price of "Cow tongue grilling table d'hote" that has been put out in the cow tongue specialty store in Sendai : from 1,200 to about 1,400 yen now. We like businessman's father and student, etc. think it is a little high-level as a meal that keeps being eaten as lunch in daytime every day.

Such a background seem to be actually in the price asked such voices such as "Came to Sendai with great pains"," "Because of date to her, and "Feelings were also good and the luxury was done for a moment today". (♪ ..there seem to be a lot of habitues who eat of course every day, too..)

[It’s a waste] is the half unused part thrown away？

Using it for ” cow tongue burnt coming ” in the majority of cow tongue specialty stores seems to have limited only the part where the raw material is soft usually.
In general, all firm parts that line up in the discount house are luxuriously rounded down, and the part finally used : very much about the raw material like beer bottle large (1.5kg) that is called a material wood. The surprise of me because it is said that only the half will be used. (about 3-4 person former level)
Generally, it seems to select a part that is called "Middle" in figure and a soft part in the tongue origin carefully and to be used.

By the way, what will be different from the tongue salt that has been put out in cow tongue scorch coming of the home and Sendai and roast meat shops?
It talked about the story of selecting the material carefully for the cow tongue of Sendai ahead. However, there is a difference big by another one. It is in the place where the ripe work that the cow tongue (material wood) that is the raw material is said, "Train" spending several days after it slices thick of paring [shi] is done for the Sendai cow tongue.

The process is called delicate work like brewing handmade sake from the temperature management to the humidity management and the ripe period. Moreover, it can be said that this training work is important work that the taste of the shop decides because doing by a different method depending in each shop, and seasoning are done at the same time.

Such training work is put out none for the tongue salt put out in roast meat shop, and in general, dishing up is done at once after [shita] of the paring, and it is put out to the shop. It is soft though it is thick ..that.., and is done the tongue of ..richness.. cow scorch daily life completion of the flavor through such long training work the cow tongue grilling of Sendai in general.

Because of those things, we can clearly feel the difference taste between one restaurant with another restaurant. Because each estaurant has its own secret method to serve Gyu-tan. This makes the taste of Gyu-tan is unique for each restaurant. For people who used to eat in various Gyu-tan specialized restaurants, the same case with sake, they can figure out the origin of ingredient and from what restaurant the Gyu-tan is.